Meet Ayodamola Otun, the Nigerian student who won IUPUI’s (Indiana University-Purdue University Indianapolis, USA) Most Outstanding Student for 2016. Ayo, as he likes to be called, major in Biology. He has received many scholarships and academic awards. 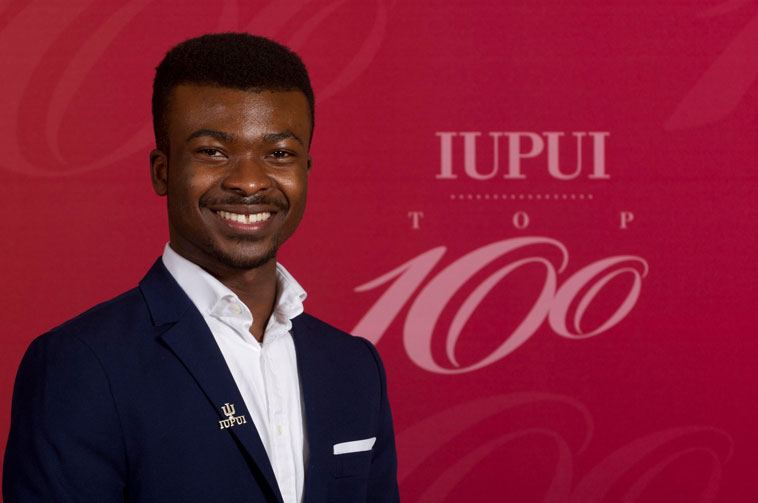 Here are a few:

Ayo is very involved on campus: University College Student Council, African Student Association, International Club, Pre Med Club, Biology Tutor, Mentor for a psychology class, had an Life Health Science Internship and many more. Receiving the IUPUI’s Most Outstanding Student award was his proudest moment as a student at IUPUI. He will be graduating in May 2017.

When asked why he decided to study at IUPUI, he said it was because of the diversity at the university. “It has a rich community of students from a variety of country, culture and background. It is also an Urban campus surrounded by a lot of companies such as Eli Lilly. These companies are sites for internships and many other opportunities” he said.

Here is his response to a few other questions he was asked by IUPUI International Student Ambassadors.

Tell us more about being a Top 100 student at IUPUI?

How will study at IUPUI help you reach your future goals?

I want to become a neurosurgeon and researcher in neurobiology. At IUPUI, I have been able to complete pre-requisites to apply to medical school. I also got opportunities to explore both careers through research, internship and shadowing. I actually discovered my passion for research through my involvement in research through research programs at IUPUI. IUPUI has helped me develop into an all-rounded student.

What advice or encouragement would you give to international students who are considering coming to IUPUI?

Do not limit yourself. Get involved as much as possible. It will help you create a network system. Seek assistance if you need assistance, it will make college easier than it seems. Have fun and do what you are passionate about while also being open minded and trying out new things and opportunities.

We are proud of Ayo and other African students making headlines for their outstanding academic and leadership performance abroad. Indeed Africa is grooming the next generation of leaders.

5 Signs You Are Living Above Your Means

Get real time updates directly on you device, subscribe now.

Ikenna Odinaka is an Online Publisher and the founder of AfterschoolAfrica.com and other information based websites. He is a web content writer, online marketer and trainer. He helps individuals and businesses build and grow business online using the right technology tools.
Follow him on Google+

Study in Switzerland: Nestlé MBA Scholarships 2021/2022 for Women in Developing…

Ifeoma Chime May 29, 2020 0
Applications are invited from suitably qualified and outstanding candidates for full-time study in any of the…

May 29, 2020
Postdoctoral researchers from sub-Saharan Africa, including South Africa, can go on a ‘CooperationVisit’ lasting…

May 29, 2020
Applications for Queen Elizabeth Commonwealth Scholarships 2020 are now open. Click on your preferred…

May 29, 2020
The new Commonwealth Master’s Scholarships in South Africa are open to citizens of a Commonwealth country other…

May 29, 2020
The new Commonwealth Master’s Scholarships in South Pacific are open to citizens of a Commonwealth country other…

May 29, 2020
The Working Group in African Political Economy (WGAPE) brings together faculty and advanced graduate students in…
June

Ifeoma Chime May 29, 2020 0
Applications are now open for the Africa AI Accelerator Program 2020. Promoting local innovations in the field of…

May 28, 2020
Europe School of Management and Technology (ESMT) is accepting applications for its Full-time MBA program. To…

May 27, 2020
JIAS invites applications for its writing semester from 1 February to 31 May 2021. Fellowships are open to people…

May 27, 2020
Applications are now open for the IDRC John G. Bene Fellowship 2020 for Canadians and permanent residents. …

Ifeoma Chime May 27, 2020 0
Applications are now open for the UN Economic Commission for Africa Internship (Public Information, I (Temporary…

May 27, 2020
The German Academic Exchange Service (DAAD) is funded by the Deutsche Gesellschaft für Internationale…

May 27, 2020
The Arts & Culture Trust (ACT) is pleased to announce that applications for the ACT Professional Development…

May 27, 2020
From October 2020, the European Union Institute for Security Studies (EUISS) is seeking to recruit six trainees to…

May 27, 2020
The National Arts Council (NAC) invites artists and arts organisations to apply for funding for arts projects that…

TWAS – Mohammad A. Hamdan Award 2020 for Researchers in African…

May 27, 2020
This new award will be given for outstanding mathematical work carried out by a scientist working and living in…

May 27, 2020
The Dutch Ministry of Foreign Affairs provides OKP (formerly known as NFP) and MSP scholarships for the RNTC…

May 19, 2020
INTRODUCTION This is a selection of the top ten universities in Canada for students to study Politics and…

May 19, 2020
INTRODUCTION In this article, we present the top ten universities in Canada to study Business Management and…

May 13, 2020
This article is a description of the top ten universities in Canada for mathematics. Selection is based on quality…
Student Tips

How to End Up Graduating With a Third Class

Clare Aririahu May 12, 2020 0
3rd class is not a position meant for any particular set of people, likewise other grades. You are where you found…

10 Places You Should Go To Before You Die

May 12, 2020
Did you know: you could add ‘visiting beautiful places’ in the portfolio. Looking at the wonders of the world gives…

Top 10 Hardest Schools to Get Into

May 10, 2020
It is not really so easy to get admission in a faraway country. The processes involved are very daunting and…

Stanford University – All you need to know

Apr 26, 2020
Introduction Investment in higher education in China has been enormous in recent years, making it an attractive…
Inspiration

How to Become a Fashion Designer Without a University Degree

Sarah Aboje Apr 25, 2020 0
Fashion designing is a very lucrative job that can be acquired not just through formal education but also by…

Apr 25, 2020
A degree in these Science, Technology, Engineering and Mathematics (STEM) courses will improve your skillset and…

How to Become a Software Developer Without a University Degree

Apr 24, 2020
Not having a degree should not deter you from achieving your dream of becoming a software developer. Here are tips…

Apr 24, 2020
Do you get enticed by the beautiful images and pages of Vogue magazines? Are you interested in modeling? This is…

How to Become a Film Maker Without a University Degree

Apr 23, 2020
Did you know: You can become a film maker without a university degree? Here are the skills required and a guideline…
Popular Categories
More Stories