Do you aspire to become an entrepreneur; a business owner? May be you are consistently in a brainstorming session to discover that proverbial great idea that will take the world by surprise before you launch your business.

Like gold, great idea is precious and not readily available. The skill required for Gold prospecting (the act of searching for new gold deposit) is active and not passive. A lot of research, speculation and technology (metal detector etc) goes into the process. Yet most aspiring entrepreneurs expect to discover gold passively without first of all going for the search.

It is common conception that you need a great idea to start a business that will become successful, especially in the 21st century – the information age. The belief holds that those who launch highly successful businesses usually begin first and foremost with a brilliant idea (technology, product, market potential) and then ride the growth curve of an attractive product life circle. 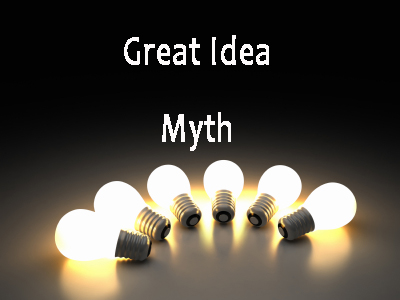 Aspiring entrepreneurs rely on this belief to idly await that moment of epiphany when the light bulb turns on, and the proverbial great idea pops up, before they take the step to get started. As compelling as it is, this belief does not reflect in most successful companies; and if relied upon, often result in procrastination, self limitation and latency.

Procter and Gamble started as a simple soap and candle maker, Motorola started as a struggling road side battery eliminator repair business. Great idea is like gold; to discover it you must get out there and start digging.

Below are examples of entrepreneurs and companies that bent the concept of ‘Great idea’ being the essential tool to start a successful business.

Note that this article is not meant to dispute the importance of having a good idea and a plan before starting a business. The point here is that it doesn’t have to be a reason for inaction. As an aspiring entrepreneur, you have to remove every negative orientation and ideology that is holding back from taking action.

On August 23, 1937, two graduate engineers in their early twenties with no substantial business experience met to discuss the founding of a new company. They had no clear idea what the company would make. They only knew that they wanted to start a company in a broadly defined field of electronic engineering.

They brainstormed a wide range of initial products and market possibilities, but had no compelling ‘Great idea’ that served as the founding inspiration for the fledgling company.

Bill Hewlett and Dave Packard decided to first start a company and then figure out what they would make. They started trying anything that might get them out of the garage and pay the light bills.

According to Bill Hewlett:

When I talk to business schools occasionally, the professor of management is devastated when I say that we didn’t have any plan when we started – we were just opportunistic. We did anything that would bring in a nickel…

The company struggled and stumbled along for nearly a year before it got its first big sale – 8 audio oscilloscopes. It was until early 1940s Hewlett and Packard – HP – got a boost from war contracts.

When Masaru Ibuka founded Sony in August 1945, he had no specific product idea. In fact, Ibuka and his seven initial employees had a brainstorming session – after starting the company – to decide what product to make. For weeks they tried to figure out what kind of business this new company could enter to make money to operate.

They considered a wide range of possibilities, from sweetening bean-paste soup to miniature golf equipment. Sony’s first product attempt (a simple rice cooker) failed to work properly and its first significant product (a tape recorder) failed in the marketplace.

7 Industries Most Likely to Make you a Millionaire Today

The company kept itself alive in the early days by stitching wires on cloth to make crude but sellable heating pads. With the Sony Pioneer Spirit, Sony had grown to become a global leader and manufacturer of electronic products.

Sam Walton also started without a great idea. He went into business with nothing other than the desire to work for himself and a little bit knowledge and a lot of passion about retailing. He didn’t wake up one day and say, “I have this great idea around which I’m going to start a company.”

He started in 1945 with a single Ben Franklin franchise five-and-dime store. Walton built incrementally, step by step, from that single store until the ‘great idea’ of rural discount popped out as a natural evolutionary step almost two decades after he started his company.

“Somehow over the years folks have gotten the impression that Wal-Mart was something that I dreamed up out of the blue as a middle aged man, and that it was just this great idea that turned into an over-night success. But our first Wal-mart store was totally an outgrowth of everything we’d been doing since 1945 – another experiment. And like most over-night successes, it was about 20 years in the making.”

Ingvar Kamprad started buying and selling matches and pencils at an early age. At age 17, with a cash reward from his father, for doing well in school, he founded IKEA. He continued to expand his business to a variety of goods, including wallets, watches, jewelery and stockings. In 1947, Kamprad introduced furniture into the IKEA product line. He later focused his business on furniture making.

One day one of his employees, Gillis Lundgren was having difficulty fitting a table for transport. After several unsuccessful trials, out of frustration he shouted: “Oh God! Let’s pull off the legs and put them underneath!”  That incident gave Kamprad the ‘great idea’ that birthed to a low cost product line… furniture designed to be sold unassembled. This established IKEA as a cost leader in furniture business worldwide for its innovative and stylish designs..

The list will not be complete without an example from home.

Mrs. Ogunwale, maker of Baker Water and Baker Bitters told her story, on how she discovered a business opportunity and quickly shifted focus from her initial passion-oriented business. Mrs. Ogunwale was passionate about catering. She won a deep freezer after a vocational training program, and started her catering business, somewhere close to Lagos toll-gate. She also sells cold ‘sachet-water’ with her freezer.

One hot afternoon, a young boy, one of the hawkers along the expressway, approached her to help him freeze his bag of sachet water, which has gone hot from the scotching sun. She reluctantly agreed on the terms that he’ll pay ten naira for the bag. By the end of the day, she made sixty naira doing business with the little boy – more than what she makes from her catering business. She went from selling single sachet to selling chilled bags of sachet water with extra profit.

More and more customers patronised her new business until she had more customers than she could handle. She quickly abandoned catering to focus on sachet water business. She bought new freezers (up to 7) and rented a bigger space. Much later, she went ahead to start her own sachet water company. Today her company produces bottle water, Baker bitters and other products.

Several such examples abound locally and internationally of businesses that started with no clear idea of what product or service the company will offer. They had the passion to do business, even when they were not sure what business that would be.

Some even began with outright failure. But the important thing is that they got started, and took advantage of the opportunities that crossed their path.

These businesses and several others like them demystifies the widely help myth of a far-seeing entrepreneur who envisions a great idea and founds his company to capitalize on a visionary product idea or market insight.

Lesson for aspiring entrepreneurs: If you desire to start and build a business but have not yet taken the dive because you don’t have a ‘great idea’, be encouraged to lift from your shoulders the burden of the great-idea myth.

Don’t wait for the perfect time. Most often, the great idea will only pop out when you are in the journey, tinkering and stumbling along in the field. Take that first step, get started and learn what you need on the ‘go’.

10 Steps: How to Apply for Scholarships for international students

7 Industries Most Likely to Make you a Millionaire Today

The Royal African Company and Slavery in West Africa:…