Mr. Dan Tenshak, the Chief Executive Officer of the Yakubu Gowon foundation, has made it known to the News Agency of Nigeria (NAN) in Jos on Thursday, that the Yakubu Gowon Foundation (YGF) is organizing its 2012 national essay competition for serving National Youth Service Corps (NYSC) members.

The essay competition, which was part of the activities to commemorate the 78th birthday of the former Head of State, Dr Yakubu Gowon, would be organized in collaboration with the National Orientation Agency and NYSC directorate.

The topic for 2012 YGF essay competition, is “Harnessing Our Diversity and Strength for National Development“,

He said the competition was aimed at keeping the mandate of upholding worthy values and legacies of leadership in the nation.

“It would also help in the re-orientation of the writers and readers as well as foster peace, unity and selfless service to humanity in addition to providing an avenue for the writers to make suggestions for the development of the nation,” he added. 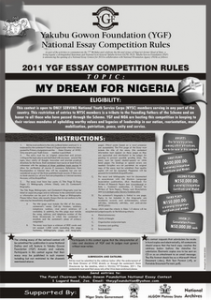 There is a consolation prize of N50,000 each for seven other essays in the competition.

The best of all the essays in the national contest will be submitted for publication in some national dailies. It would also be featured on YGF Annuals and website.

The CEO advised interested contestants to make sure that their essay is endorsed by the head of the organisation of their primary assignment and state director. (NAN)

[Note: the 2012 YGF Essay Competition is yet to be published on the YGF website as at the time of posting this. But it should be updated anytime soon]

The Yakubu Gowon Foundation Essay contest was first offered in 2011.

UBA Foundation 2nd National Essay Competition 2012 – Up to 2.25million Naira to be won

Ifeoma Chime Dec 8, 2021
Applications are open for  the ‘Landscape Ecology and Nature Conservation’ Masters programme at the University of…

Dec 7, 2021
Leading the Middle East One Young World Scholarships 2022: Are you a young leader from The Middle East? You could…

Nathaniel Azamosa Dec 8, 2021
There is so much hype about earning money online. It is true that you can work and earn a good income online.…

Nov 29, 2021
One of the greatest motivating factors that propel people to accept a job offer is the salary incentive/wage. Here…

10 Importance of Mass Communication and its Courses.

Oct 27, 2021
Mass communication involves so many disciplines and incorporates vital elements of related fields like strategic…

10 Reasons Why Studying Economics is Important

Oct 26, 2021
In this article, we'll be discussing the importance of studying economics. There are a variety of reasons a…

15 Best Apps That Can Pay You Real Money

Oct 22, 2021
These apps can apps that can fetch you good money. They can be downloaded on your iOS and Android phones where the…
Popular Categories
More Stories